None of the usual pre-amble with this one, I have a lot to talk about. Tonight’s’ film is Wings (1927). Now, this is a film that comes with some gravitas embedded deep within. At any point in time there are at least 8 other smaller, less historically important films orbiting it. It drags them in, slowly decreasing their circles until they sit quivering on the event horizon. It then reminds them why they are inferior. It tells them it was the first recipient of the best picture Oscar in 1929.

Hollywood is in its veins and is clearly visible throughout. It was partially re-written to include a female character so Clara Bow (one of the top draws of her day, and 1927 was indeed one of her days) could be in it, it has some slapstick fight scenes and the old ‘2 guys, 1 girl’ storyline. But it also has some amazing battle scenes and moments of sheer, unencumbered brilliance that place it head and shoulders above its contemporaries. It has earned its place in history whilst other films of the era have fallen into mediocrity.

Clara Bow had no delusions surrounding her appearance alongside her co-stars Charles ‘Buddy’ Rogers and Richard Arlen. She described herself as ‘whipped cream’, I agree. The only thing her presence adds to the film is about 45 minutes. She is all sickly sweet dimples and pouting, tear glistened eyes throughout. But there is some context to be added here. Wings is Paramounts’ big money response to MGM’s The Big Parade (1925) and Fox’s What Price Glory (1926). They threw money at it hand over fist and as such, having their main draw card watching from the wings (no pun intended), was not an option. 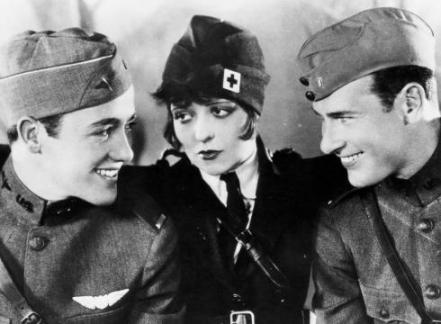 Overall, the feel is quite light-hearted for the majority of the early parts of the film. As the plot is developed we get our first sights of some of the standard, clichéd themes that they’ve dusted off and trotted out for us to role our eyes at. I remember the first time I watched this I wondered if this was as good as it gets. It’s easy to watch but I was expecting much much more. There are hints in the early scenes that there is a director with some big ideas somewhere behind the camera. The first time we see one of the male leads carousing with his girl they are swinging back and forth from an ornate swing tied beneath a tree. Potentially another cliché there but the camera is attached to the swing and what we get is something different and visually pleasing.

The quality camera work doesn’t stop there. The two male leads both take to the air and are shot in their aircrafts with cameras mounted in various spots around the planes. The results are amazing. There is a real sensation of the speed these vehicles move at. External shots of flight battle scenes, no doubt shot from a myriad of camera planes, show the scale of what the real pilots were dealing with. Tiny planes pinpointed against massive, rolling clouds. Whole squadrons hiding in the glare of the sun waiting for the ideal split second to drop in and let loose on the foe.

William A Wellman was a relative unknown when he was chosen to direct. The studios thinking was that his experiences as a pilot during the war would help him to add something different to the mix. They were right, the standard model of the day was to shoot pilots on the ground and cut the aerial stunt work in later. The ground-breaking camera work is the reason this film deserves the plaudits it has received down the years and also it’s Oscar. One final example of the innovative use of cameras is when a German Observer in a balloon parachutes to the ground. He has a camera strapped to his leg and the ‘up leg’ shot as the guy jumps and his parachute opens is something no-one would’ve seen before.

This parachutist is then seen from the ground as he comes in to land and you can clearly see the small, motor powered camera strapped to his leg. He takes a heavy landing as his parachute seems to gather a large gust of wind as he nears the ground. He hits with a sickening thump and appears out cold as the ‘chute drags him out of shot. Wellman wasn’t afraid to use this footage in the final cut and there are several other stunts in the film that look like they would’ve really hurt. There are planes crash landing and overturning with sickening abruptness that could easily have snapped a neck and there is a car crash with dummies in the rear seats and a cowering stunt driver holding on for dear life in the front as the car flips and roles. The stunt guys definitely earned their money on this one.

I should imagine the majority of the budget was spent on the last 45 minutes. After some light hearted guff to appease the Clara Bow fans (including a fleeting glimpse of her tits, this was pre-code let’s not forget) we get to the nitty gritty. We are talking large scale troop movements, huge landscape shots of trenches and no man’s land, shot from above from fast, low flying planes. Explosions that look like they hurt the extras as they detonate with eardrum destroying closeness. It’s real, it’s vivid and it’s a true spectacle. This is what this film was all about before Clara bloody Bow was shoehorned in. Amazing stuff.

There’s so much more to talk about. Gary Cooper turns up for a few seconds before making probably the only thing close to an anti-war message in the film by dying in a mid-air collision. There’s a wicked overhead shots of 3 giant German Gotha’s taking of in formation, There’s the slightly cliché ending that I won’t ruin if you’ve not seen it. I could go on.

So, if I squint my eyes a bit and look at this film overall I have to admit it’s very uneven, unbalanced maybe. It flip-flops from slapstick Clara bloody Bow puff piece to gritty blood spitting war drama and back within the first 45 minutes…and then does it again in the last 45! The good stuff is great. The camera work, the aviation, the stunts (those poor poor stunt people). But the story isn’t anything special or original. What we have is a piece of cinematic history with some cheap Hollywoody stuff thrown in but also a lot of heart and realism produced by guys who were there and wanted to portray that realism to the best of their ability. In this regard it is a complete success. All this death and cliché and realism and schmaltz comes to an end with a flourish. I hope, if you’ve not seen it, you’ll allow me this one small spoiler. The film ends (as they all should) with the couple in each others arms and a shooting star over their heads….aaaaaannddd…goodnight.

to get your copy.