If I say Canada, what do you think of? Assuming you don’t live there you probably think of Mounties, Snow and people saying ‘aboot’ when they mean ‘about’. From a Great War perspective the Canadians come out of the history books looking courageous and fierce. They fought with valour at the big ding dongs in the second half of the war. 2nd Ypres, Vimy Ridge, The Somme, Passchendaele, and Amiens. 600,000 odd men served through the years of the war with roughly 10% casualties overall.

From a Great War Film perspective things are not quite so rosy. I’ve reviewed ‘Passchendaele’ already, and found it wanting. There’s a few more of them out there but none of them are particularly well regarded (this doesn’t matter to me of course, they will all receive a review at some point). My film today is probably one of the better known Canadian Great War Films, ‘A Bear Names Winnie’ (2004). 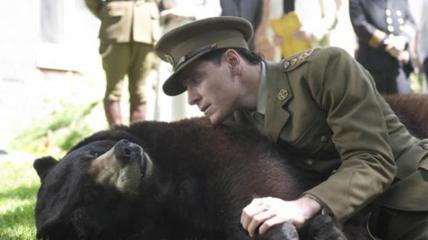 It tells the story of a little bear sold to an army vet by a hunter who’d recently shot its mother. The bear becomes the mascot for the division and in honour of their home province they call him Winnipeg. Winnie for short. Okay, has the penny dropped yet? A bear? Named Winnie? Possibly fond of honey? Yep this is the Winnie the Pooh backstory. One thing I noticed was that there is no overt mention of this throughout the film, even at the end when they do the catch up, what happens after the film bit they don’t mention ‘Winnie the Pooh’ by name, simply saying ‘she was the inspiration for the Winnie character in his (AA Milne’s) famous stories’. I’m guessing there were all kinds of copyright reasons why they did this.

There are a few star turns. Michael Fassbender plays the lead as the veterinarian soldier who buys Winnie and smuggled her to the UK. David Suchet does a particularly good job playing a mentally anguished, bastard General who falls to pieces during the second act and Stephen Fry, dear dear Stephen Fry (as a Brit, it’s impossible for me to dis-like him) plays a zoo-keeper. David Suchet really is the star of the show though. His performance in what is basically a made for TV kids film is excellent.

Sadly, take out Mr Suchet and there isn’t really much else to comment on. The story doesn’t really do too much. The bear runs away a couple of times and comes back, they’re not allowed to take him to England and they do anyway, they go to England and then France and there’s a couple of explosions. There’s some silly plinky plonky clown music throughout that makes the whole film feel slapstick. And then it’s the end of the war, Fassbender’s in hospital and seemingly a bit down in the dumps. Winnie is sent in to bring him out of his funk and everyone lives happily ever after.

The biggest downer is probably the lack of continuity around the bear. Winnie should’ve been the centre of the story but I never felt like I knew her. The main reason for this is that there are obviously 5 of 6 different bears used and they vary in size massively. She sits on Fassbenders’ lap in an early scene and is the size of my two year old. Next up, in film time, probably a week later the bear is about three times the size, then it’s smaller again, then tiny, then back to the biggish one. It doesn’t ruin it but it does make the core character hard to bond with.

Do I have much more to say, no, not really. Fassbender does alright, Suchet is good, our Lord and saviour Stephen Fry does a good London accent, bless him. The story isn’t up to much and it really feels like a kids film. But kids films were better than this in 2004 and much much better than this now. The ending is a big slice of Canadian cheese and if any of those fake rifles could actually fire a bullet I’d be politely asking that they be used on the writers. Line them up, cast the blindfolds aside, aim the muzzles directly at their soulless hearts, look them squarely in the eyes and blow the mothers away.

Basically, it’s okay if you don’t want to think about anything and just watch something that’s 10% better than doing nothing. It’s on the youtubes here if you feel like giving it a go. You might want to use headphones though because the sound’s a bit odd. Or buy it yourself here Clicky Clicky

I’m sure that’ll not sound funny at all.

Next time, hopefully, I’ll have received my backorder bluray of the silent version of ‘All Quiet on the Western Front’ which I’m super excited about. Fingers crossed it turns up soon. Au revoir amigos.