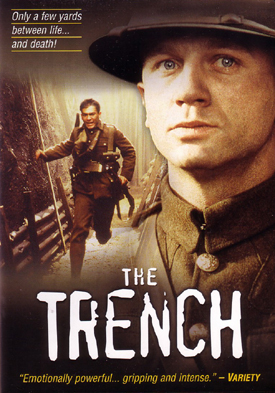 If there’s one battle, front, theatre of war or campaign in the Great War that I feel more affinity to than any other it’s The Somme. My Great Grandfather, Edward Henry Evennett died on the 10th of July 1916 near Pozieres. The account of the movements of his battalion (13th Battalion, Rifle Brigade) on the days leading up to and during the battle in which he died is explained in detail in Lyn MacDonald’s ‘Somme’ (ISBN 978-0-14-017867-8).

Basically his battalion was the middle one of three lined up somewhere near Pozieres with orders to attack at dusk. The expected cloud cover didn’t arrive so the attack was cancelled and runners were sent out to inform the three groups. Sadly the runner for my Grandfathers section didn’t make it in time and over they went. They advanced without any artillery assistance (they’d been stood down too) and took heavy casualties. Eventually, and with severe losses, the order was given to withdraw.

Unfortunately, some British observers now noticed a large phalanx of men heading for the British front line across no man’s land. It was dark so they were unable to tell who the chaps were. So the order was given for the artillery to open fire on them. And there you have it, my Great Grandfather was either killed in the advance by German soldiers defending their own line or by his own guns having been ordered to head back home. It’s probably a very common story, but still, what a waste of a life.

What this means for me is that anything with any mention of the Somme becomes essential reading, watching or listening. I feel like I have to know everything there is to know about the battle, the struggles of the soldiers, their movements, the weather, whatever it is I have to soak it up. Hence, the film today is one I’ve seen before. ‘The Trench’ (1999) is the story of a small section of Trench somewhere on The Somme in the 48 hours leading up to the initial advance on the 1st of July. While a thronging mass is slowly forming behind them in the reserve lines, a small band of men hold the front line trench in case of an unlikely German attack through the trommelfeuer barrage. 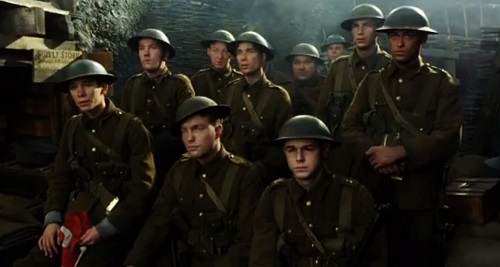 We have a young cast of soon to be big(ish) names. Daniel Craig is here and there’s also Danny Dyer, Paul Nicholls (Joe Wicks from Eastenders in the late 90’s) and Cillian Murphy from Peaky Blinders, there’s also Ben Wishaw (the new Q from the Bond films) and Julian Rhind-Tutt who was in The Green Wing. The set has been well put together and seems realistic enough. There’s the constant distant sound of drumfire shells exploding on the German trenches in the near distance.

There are all the staple story elements that I expect to see. There’s the conflict between Officers and Men, there’s the bawdy chat, there’s the arsehole James Cagney in ‘The Fighting 69th’ type who causes trouble for everyone else (Danny Dyer I’m looking at you), there’s a tortured Sergeant, broken promises, moments of terrorising gore, memories of home and, of course, there’s a chap who looks over the top and gets picked off by a sniper. There’s not really anything original or new on display but that’s okay, all the standards have been handled well and work with the story. 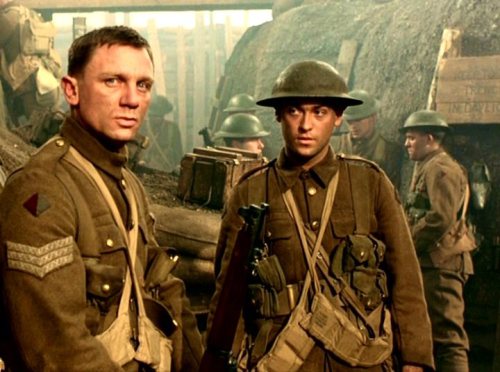 The dialogue goes a bit ‘School Play’ in places mainly when a couple of the Scottish characters are conversing but that’s the only thing I really have that I don’t like. Other than that the film is well put together, moves at a decent pace and even though nothing much really happens it kept me engaged and hoping for the best for the characters. The (soon to be) star turns help the film majorly, Daniel Craig and a very young Ben Wishaw being the standouts. Oh yeah, there was something else I didn’t like. Danny bloody Dyer. I know he was playing an unlikable character but still, I hated him. He doesn’t do acting, he just says words one after the other with an accent.

Having originally been told they were going to be a carrying party in the third wave things change when a senior officer arrives for a film shoot for some propaganda flick. News soon reaches them that there’s been a change of plan, jolly bad luck as it happens. Some other chaps got lost on the way up and our guys are going to be first out and over.

A German soldier is captured on a trench raid and it becomes evident the Germans trenches, their wire and their spirits are largely intact. Still, they follow their orders, they gather together and fix bayonets. The shelling ceases and they wait. In the far trenches the Germans leave their deep, well shored dugouts and man their stations. Finally a whistle blows and the boys climb there ladders. The sergeant goes up first and encourages his men on. He dies within seconds. The men go on. They walk, trudge into the spitting death of machine gun fire and one by one they drop. The ending is pretty stock standard with the final shot baring more than a striking resemblance to the final seconds of ‘Gallipoli’. But, how do you do it any differently? It’s always sad, it always leaves you thinking.

All in all it’s a good film. Nothing really ground breaking or life changing, just a decent enough, well put together independent film. The lack of money hasn’t hindered it and in fact (much like ‘Beneath Hill 60’) the creative use of the minimal budget has helped to make it claustrophobic and intense. There’s nothing really to moan about, with the exception of Danny bloody Dyer, and much to applaud. I recommend it if you’ve not seen it, it’s a simple story, well told. Do the old Clicky Clicky

should you want to own a copy or watch it on demand.