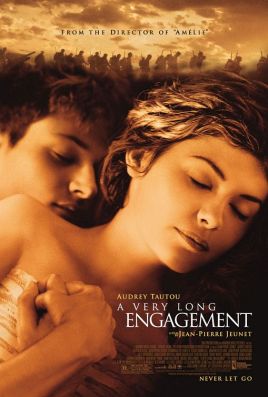 I’ve been aware of this film for just about as long as I’ve been doing this blog. Maybe a bit longer. I know it comes with a bit of a reputation for being a halfway decent film and it’s got a bit of pedigree too what with Audrey Tautou starring in the lead role and Jodie Foster in one of the supports. For some reason it’s just never jumped out at me when I’ve been thumbing through my list for something to watch….and I’ve watched some total stinkers don’t forget. In my head I had a rough idea of the story. A French girl searches for her probably dead lover in the years after the war. It obviously didn’t do much for me. Well, finally I thought the time was right to give it a blast. And I’m glad I did.

As I just summarised ‘A Very Long Engagement’ (2004) is the story of a young French woman in search of her lost love in the years directly after the conflict. Audrey Tautou stars in the lead role for a second time for Director Jean-Pierre Jeunet in the follow up to his 2001 box office hit ‘Amelie’. The film has a simple enough story on the face of it but Director (and co-writer) Jeunet has a way of telling the story that adds tangents and asides as it meanders its’ way to a conclusion. We get to see the characters quirky idiosyncrasies and darker sides, with little peaks through the keyhole to their secrets and desires.

The cinematography is as detailed and as loaded with quirks as the script. Whether it be a beautifully lit rural idyll, a Parisian Town house or a grief filled shell hole the screen is filled with details, bit and bobs and features to draw your attention. There is a scene where a shell drops metres short of a trench. A split second later the trench wall explodes burying everyone in the vicinity. I’ve read descriptions of his happening, shells designed to explode after burying themselves a few metres below ground, but never seen it depicted on film.

From the outset the story has a good pace and the details of the characters’ lives before, during and after the conflict are at its’ core. It jumps forwards and backwards in time to illustrate the story but this doesn’t impact on the narrative which is silky smooth throughout. The film comes in at just over two hours (excluding credits) which I feel is just about perfect. It does move at a fair old lick and you need to keep on top of the information the lead character is assimilating. If you miss something though it’s no real biggy as the script leads you by the hand and gives up the important details without too much cerebral action required by the viewer.

I’m unsure about the historical accuracy of what is being portrayed on screen. The film opens with five condemned poilus being led to their fate. Each having shot themselves in the hand in an attempt to escape the conflict. They are finally forced up into no mans’ land to die in any one of the thousands of ways it would be possible to die in no mans’ land. We see several top brass either not deal with something or actively ignore it. There is a lack of integrity and ownership for the problem of what to do with these condemned men. Everyone knows something must be done but none have the courage of their convictions.

Tautou’s character Mathilde (My youngest daughter is called Matilda, I wanted to spell it ‘Mathilde’ but my Mrs vetoed it on the grounds the poor thing would spend her whole life telling people how to correctly spell her name. I still think the European ‘Mathilde’ is superior to the Roald Dahl spelling ‘Matilda’. Hopefully Mrs Great War Films doesn’t read this!) is a feat of screen writing genius. She is disabled, geeky, quirky and detailed (like the script and the cinematography), plays the tuba and has an intensity and focus on her goal. She is brilliantly played by Tautou who adds her own charms and gentile sweetness to mix.

As the story unfolds Mathilde is drip-fed tidbits of information that lead her on to her next discovery and on from that to the next one and so on. It’s a detective story in the most part with a love story and a war story thrown in for good measure. It succeeds in each category and even the subtitles don’t seem to get in the way. My famously short attention span survived the length and the need to keep my eyes firmly fixed on the screen at all times.

There are a few scenes that stand out for their visual artistry. There’s a ‘Paths of Glory’ style backwards tracking shot through a trench as the poilus fix Bayonets. The progression of the fixing matches the pace of the tracking shot perfectly and the result is an almost hypnotic mixture of lots of men all performing the same robotic actions one after another and the audible oiled steel clunk of bayonet meeting rifle. There are a few similarities to ‘Paths of Glory’ actually. Obviously the French perspective but also the tricky camerawork and anti-war/anti-establishment position.

There’s the classic ‘Oh! What a Lovely War‘ and ‘The Four Horsemen of the Apocalypse‘ hillside chocka with crosses bit. And also, at the end of the film Mathilde walks down a dark hallway towards a brightly lit garden. The camera is still and watches as she slowly limps to the door through the enveloping darkness of the corridor. As she pauses at the door to the garden the camera slowly walks towards her like a loving partner offering support. The summer warmth and sounds of this beautiful French garden fills the screen. In my mind the Director high fived the Cinematographer after yelling cut. There are plenty more moments like this and the film deserved its Oscar nomination for Best Cinematography (It lost to ‘The Aviator’).

It really is a very good film. I can’t believe it’s taken me this long to watch it. I’ll trot out my usual ‘If You Haven’t Seen It You Simply Must’ line and leave it at that. It has so much to offer, I’m sure a second viewing will uncover a load more details I missed first time around. I’ll also now be forced by my ever so slightly OCD brain to watch everything else the director has knock out and maybe even ‘Paths of Glory’ too. I think this might’ve just snuck into my top 5 Greatest Great War Films.