It’s fair to say that the experiences of the combatants of the various countries in the Great War each have their signature array of horrors. These experiences, these elements of their story are normally closely linked to a particular battle. In the case of the British forces, that battle is most likely The Somme in 1916. The trenches, the shelling, the barbed wire left uncut, the piles of dead, the lions led by donkeys. Australia, New Zealand and Turkey align themselves most closely to Gallipoli with its flies, dysentery and that honourable, tiptoeing retreat. Canada, Passchendaele. Italy, ice-cold mountain tops. France is an easy one; Verdun.

These narratives are played out in the films of the conflict to the point where they can appear to be stereotypical plot devices rather than fact based recountings of the individual terrors faced by those who were there. My film today is the archetype of the French experience of the Great War. The esprit de corp, the camaraderie, the bleeding white, the backs to the wall, all for one mentality. ‘Wooden Crosses’ (1932).

Wow, where do I start with this one? It’s 1932 and if this was Hollywood we’d be in for another in a long line of films where talking as a means of conveying a story is still very much a novelty. But this isn’t Hollywood, oh no this is France, Europe and they seem to have a very good handle on how to use the medium of talking film to engage with an audience on an emotional level. And basically what it conveys is the deep emotional scars felt by the nation of France for the suffering endured by its people. It’s pretty grim.

The film opens with sombre music and rows of soldiers who slowly turn to crosses before our eyes. Well that’s setting the stall out early. We get to meet the individuals of the unit at the start as they’re introduced to a new arrival. Their characters are explained in that opening few seconds and we see how they interact with each other, pull each others legs, hate each other and care for each other in equal measure. They are any group of men, anywhere. And of course, this being film, we know something is about to happen to them.

It doesn’t take long for them to be marched to the front and when they get there we get to see the usual trench combat tropes. Incessant shelling, fickle fate random deaths, trench raids, moaning countrymen slowly expiring close by in no mans’ land. It’s straight into a battle scene as the Germans attack. I was a little disappointed with this battle scene. It was a bit smaller scale than I was expecting from an early 30’s film. The films made nearer to the conflict usually have an unforgivingly accurate portrayal of the experience. With hindsight, I know there’s much better to come.

There’s one bit of the film which I can see was stolen wholesale by Howard Hawks in ‘The Road to Glory’ four years later. He’s blatantly ripped off a section where the unit is sitting in a dugout and they can hear a tunnel being dug beneath them. They go nearly mad waiting for it to explode but are eventually relieved not long before the mine is blown, mushroom cloud growing on the distant horizon. Up yours Hawks!

There are artistic flourishes with the editing at random points throughout the film which really adds to my feeling that this is far superior to anything Hollywood could’ve knocked out at the time. This really is a solidly produced little number.

There’s a brief hospital scene and the extras are real life amputees, no doubt Great War veterans, who play the parts of bed ridden soldiers. There’s more than a hint of Abel Gance about it which is understandable considering his influence on most French cinema of the era. There’s also a bit of Kubrick in here. Tracking shots covering an advance through no mans’ land are more than a little reminiscent of 1957’s ‘Paths of Glory’.

Whereas the battle scenes in the earlier stages of the film lacked a bit of lustre the final half an hour or so more than makes up for it. The noise, the constant savage barrage of deafening shell fire quickly becomes annoying for the viewer and gives me a tiny insight into what the poor chaps at the front would’ve struggled through. Death is everywhere, the Germans are coming with a thumping relentlessness and almost nothing can hold them back. The scenes are dark, brooding, mournful and hellish, just like the real thing.

The heavy shelling becomes all out battle and again, as I did during ‘Wings’ and a few other early films I feel sorry for the extras and stunt men. There are shots of bombs exploding with stunt people standing right next to the explosion. I can’t see how some of them survived! They would’ve at least lost their hearing from the size of the bangs I’ve just witnessed. 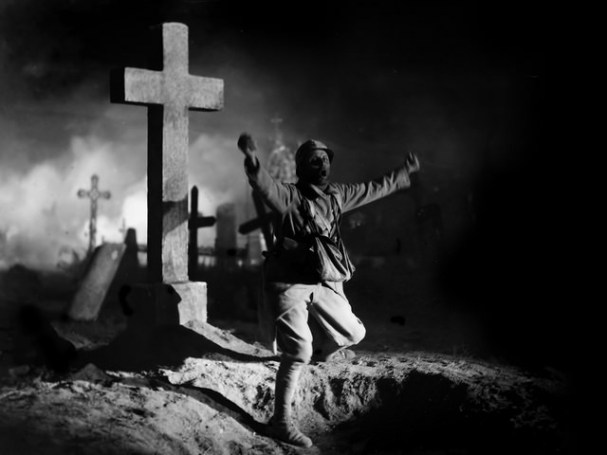 This film is very similar in sentiment to ‘Westfront 1918’ with GW Pabsts’ ‘New Objectivity’ on display. It’s a warts and all poilus eye view on the conflict. Nothing is too real to be shown. At one point we see them working their way through a massive pile of dead mens’ hats to find a decent fit for each of them. This happens while they carry on a chirpy little conversation about nothing in particular. While on the one hand we see them pulling together and decrying the common soldiers plight on the other they seem as desensitized as everyone else to the horrors of the conflict.

It’s an amazing film and does what the early Great War Films do best. It shows the conflict with an honesty and attention to detail that you just don’t see in later films. As we get nearer to the present day the films start of have convoluted storylines with the Great War acting as the backdrop. In ‘Wooden Crosses’ the war is the story, the experiences of the soldiers is the story, the soldiers themselves are amalgams of the millions of Frenchmen who died. This film is much more than just a snapshot of the conflict, it’s the plight of the French, the suffering of the Poilus, it’s their legacy and it’s a shame it’s not better known but Great War Films don’t come much better than this.

It’s been recently tidied up so Clicky Clicky

for the new combined Blu-ray/DVD edition from Amazon.