Gawd Bless the British Film Institute. In an era of Brexit, white supremacism and Nigel Farage, where marauding bands of neo-nazis are (probably) roaming the streets and murdering members of minority groups on the spot, the good old BFI is a bastion of British middle class values. If it wasn’t for the BFI my film fodder for today would still be unknown to me and I would be a little bit poorer intellectually (although a tiny bit richer financially). Intrigued? Let me tell you more.

I am a bit of a fan of ground-breaking French Director Abel Gance. I’ve reviewed two of his films for this here blog, ‘J’accuse’ (1919) and the re-written version ‘J’accuse’ (1938). First time around the film was a primal scream at humanity as the Great War was coming to a close. Second time around it’s a shrill and disbelieving shriek at the same humanity as they watched the rise of Adolf and his Nazi buddies without much complaint in the years just prior to World War Two. Between these two films my mate Abel had a dream. A grandiose, ambitious plan to produce five (yes FIVE) epic films covering the life of Napoleon Bonaparte. As it turned out he only got round to doing one of them but at five and a half hours he probably covered enough of the details. 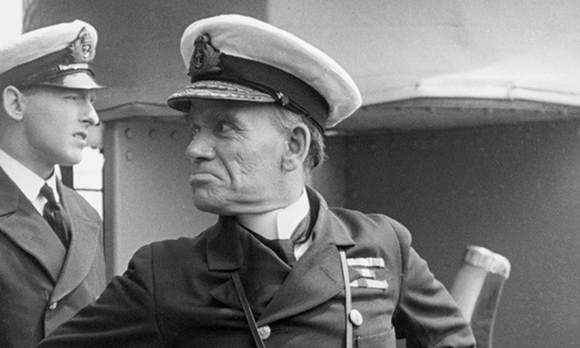 Sorry, I’m rambling a bit. The point of all this is that the good old BFI have recently done a bit of a clean-up job on Gance’s ‘Napoleon’ and as I pre-ordered my copy, the dear old BFI (gawd bless ‘em), offered me a free copy of ‘The Battles of Coronel and Falkland Islands’ (1927). Now I knew nothing about this film but a quick google and I was cock-a-hoop that I’d found (and ordered) a Great War Film that wasn’t on my list and that I was entirely ignorant of. Now that I’ve accurately conveyed this meandering tale of serendipity I shall move on to my review.

‘The Battles of Coronel and the Falkland Islands’ (1927) is a British silent film documenting two naval battles during the opening months of the conflict. As the title suggests the first battle takes place near Coronel off the coast of Chile where the British received a bit of a bloody nose at the hands of a group of German ships commanded by Admiral Max von Spee. Running for the proverbial hills, the remaining British ships retreated to the Falklands for a fix up and refuel before lucking out a bit and engaging the Germans again. This time they gave them a good shoeing and showed them what us Brits are made of (which for the record is: Tea leaves, strawberry jam and knock knock jokes). 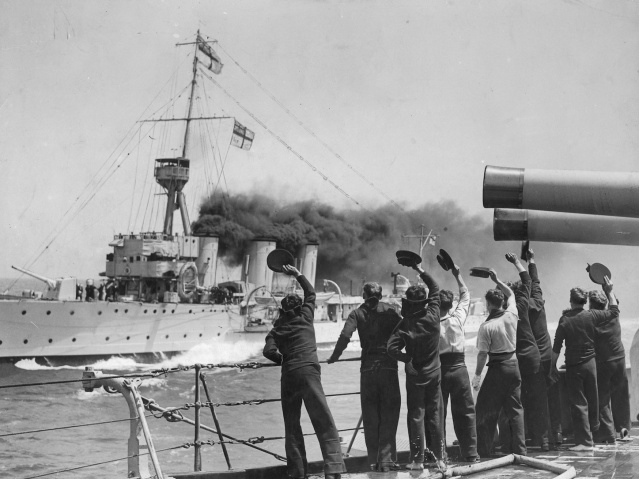 It’s a very British film. There’s a military precision about it which means every shot is perfectly squared off, the tripod screws are well tightened and the camera rarely moves. It’s a theatrical re-enactment and it’s almost documentarian in feel. Several Great War era boats from both sides were pressganged into duty by the filmmakers and were filmed in various states of steaming about the place by the camera guys for the battle scenes. To my modern eyes they’re really funny looking things those boats. I know they weren’t designed for their ease on the eye but even so it’s like the engineers were actively trying to produce something spikey, bulbous and cumbersome.

Interestingly for me, the boats are named during the opening credits and to a certain extent they are the stars of the show. The only other film I can think of where war materiel receive naming credits is at the start of ‘The Sound Barrier’ (1952) where the planes receive top billing. This attention to detail and doffing of the cap is a bit of a signature of the film. I have no real way of knowing for sure but there appears to have been a great deal of effort spent on creating something which accurately covered the logistics of the whole show. Also the various characters of the piece are written without relying on stereotypes or exaggeration. The first note I made when watching the film was ‘Germans not evil bastards!’.

At the start the intertitles set up the story by describing what we’re about to watch as ‘A victory, and a defeat as glorious as a victory’. I rolled my eyes at this and was expecting the film to play out thick with pro-British rhetoric. But I’m happy to say that was the end of the pomp and from there on in the story is told with a clinical eye for detail. It could be considered cold and for the most part it is quite sterile in terms of inventiveness however there are occasional moments of creativity from the filmmakers. There’s a bit where Morse Code messages are pinging back and forth between the ships and the messages are displayed on screen next to the ships. This was probably absolutely cutting edge in 1927. Also there are a couple of occasions where ships sink with smoke billowing from the funnels, again this kind of thing was probably pushing the envelope way back then and still does a half decent job today.

As the film finishes my initial feeling is that I now have an in-depth knowledge of the battles but, and it’s a big but, I don’t feel like I’ve watched a movie. I didn’t feel engaged in the battles. I didn’t feel any emotion for any of the characters as they won or lost the battles and struggled for their lives. So ‘documentary film’ is probably the best way to describe it. I liked it and I’ll watch it again, but I won’t be forcing any of my friends to watch it. You can buy yourself a copy from the BFI website and maybe pick up a copy of Napoleon while you’re about it.

2 thoughts on “The Battles of Coronel and Falkland Islands (1927)”