1994 was a bit of a pivotal year in my life. I turned 18. I’d spent the summer roadying for a band around Europe and returned home to the realisation that I probably needed to get a proper job and sort myself out a bit. I had a floppy set of shoulder length blond curtains that I occasionally dyed green or blue or red, they had to go. I got a job in a bank. I started earning money and I then started spending it on my social life. I started falling over a lot and sleeping with my shoes on. Girls became my sole aim. I smoked red Marlboros, drank Stella Artois and developed myself into a proto-person.

I remember going to see this film at the cinema with my girlfriend at the time. I don’t remember much about it and to be honest, the 18 year old me wasn’t the incisive, witty and erudite film reviewer I am today. I probably thought it was good because it had Brad Pitt in it. He was big news back then. 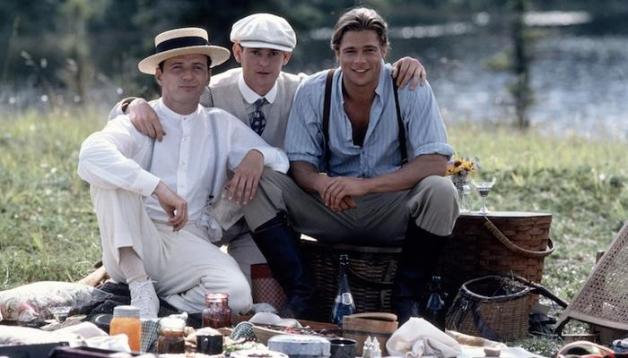 Brad was hot. ’Thelma and Louise’ had been released a few years earlier and he’d slowly gained a bit of traction off the back of that. ‘True Romance’ had come out in 1993 and then ‘Interview with a Vampire’ and my film today were released within weeks of each other at the end of 1994. These would lead onto ‘Seven’, ‘Twelve Monkeys’ and ‘Sleepers’ over the next 18 months. What I’m trying to say is that Brad was on the up and ‘The Legends of the Fall’ was clearly a role that helped to set his star status.

The film sets itself up as a bit of an epic. It’s the story of three loving brothers from a Montana wilderness family who are torn apart by the entry of a woman into their lives. As a result, this classic Great War Film love triangle (square?) acts as a catalyst for the brothers to volunteer for the Canadian Army and off they pop to France to do their bit. I say the film ‘Sets itself up as an epic’ because it doesn’t really feel very epicy. There is a decent spread of time that the story covers, I suppose, and there are plenty of twists and turns. But it’s not ‘Spartacus’ ‘Gone with the Wind’ or ‘Cleopatra’ by any means.

My biggest film bug bear is front and centre for large tracts of the film. Orchestration is used in lieu of the writer or directors ability to produce something which can cause an emotional response in people. The music is used to tell us how to feel about what’s going on up there on the screen. I hate that. If I want to feel sad about something I should naturally feel sad about it because it’s just happened and it’s sad, not just because the music’s gone a bit weepy. In reality the acting and the ‘Big Country’ cinematography meant it didn’t really need the 60+ musicians giving it the beans.

Anthony Hopkins is good (isn’t he always?) as the loving, understated paternal figure. A good man who thumbed his nose at the army because of their treatment of certain folk who weren’t allowed on golf courses. Hopkins is good in everything though isn’t he? He could probably knock out three or four films like this in a year without getting a sweat on. His turn in this does what you’d expect. He portrays a man in control. In control of his family, his farmstead, his life and that of his sons….And then the girl turns up and it all turns to shit.

The war segment features two large scale battle scenes with minimal gore but a fair amount of action. The details of military life have not been portrayed in any great detail I fear but at the same time I don’t think it’s the primary aim of the film to show the war in its’ minutiae. Young Brad gets to show off his horse-riding skills and gunmanship a bit before somehow sneaking up behind some German chaps and showing them who’s boss. This happened just after the Bosch fellows had killed his brother, with this incident leading on to his mental downturn that takes up the majority of the rest of the film.

So with one brother out of the way we can settle into a stock standard Great War Film love triangle. We have ‘J’Accuse’, ‘Wings’, ‘The Road to Glory’, ‘What Price Glory?’ etc to thank for this little Great War Film trope. Always the same scenario. The dudes are friends (or brothers in this case) they meet a girl, get grumpy with each other and then they go to war and spend every spare moment sending her letters and staring at an overexposed photo they’ve just pulled from a worn out wallet.

In the end the stand out feature of ‘The Legends of the Fall’ is Brad Pitts’ hair. What a work of art that is. He frequently moons into the middle distance whilst using his forearm to move his lions mane of heavy hair from his face. It is truly epic hair. Other than that the film’s enjoyable but a bit wet around the ears and ultimately unsatisfying. If you haven’t seen it (The film not Brad Pitt’s hair) then you probably should just so you can knock it off the list. It’s one of those semi-classic titles that seems to be held in a slight reverential status for some reason. But once you’ve watched it you’ll most likely realise it’s a bit of a damp squibb. Unless you like Mr Pitt of course, in which case you’ll cream at least thrice.