In a slightly foggy and half-forgotten way I think I just about remember Biggles from when I was a nipper. I can’t quite remember the details but just the name makes me conjure images of Britishness. A warm summer evening watching cricket, the Last Night of the Proms, boys own stuff, swooping and shooting off a tail, goggles and a scarf, acts of derring do. Basically it’s all about tea, crumpets and acts of chivalry in my head. Which, having just now watched my film of the day, is definitely NOT what’s on the celluloid. My memories of Biggles and this film have very little in common.

‘Biggles’ is a 1986 film about the eponymous fictional British flying ace James Bigglesworth. A deeply British archetype who became popular due to a massive collection of books written by Captain W E Johns, who was himself a Great War pilot. In the books, Biggles’ career spanned the Great War, WW2 and on to become a flying Police Officer in later life. The film version was planned as the first of a long series of films to cover some of the same ground as the books. The producers had their eyes on creating a franchise much like James Bond or Indiana Jones or Back to the Future but for reasons that will become obvious this never bore fruit.

The films’ opening credits are quite jarring and not what I was expecting for an aerial Great War Film. We have a night-time helicopter flyby of a cityscape, like Airwolf meets Santa Claus the Movie. There’s the singer from Yes knocking out some 80’s prog-rock nonsense about being a “hero, hero, HERO!”. As the music fades we settle in on an American couple kissing good night to one another in a sports car. No this is not your usual Great War Film, this is a Miami Vice, William ‘The Refrigerator’ Perry and Magnum PI kind of Great War Film. And oddly this guy who we’ve just met saying goodnight to his Mrs is actually the star of the film. The eponymous ‘Biggles’, the dude who the film is named after, is actually a bit-part supporting character in his own movie!

I should probably explain the premise of the film. The 80’s American guy is the boss of a company who make TV dinners and who is somehow linked in time or ‘Time-twinned’ (face/palm) to our hero Biggles. This means at random points a small tornado forms just out of shot, newspapers whirl around and he gets struck by lightning. He then disappears from wherever he is and re-appears somewhere near Biggles in 1917. He doesn’t seem to question this too much and makes friends with an old guy played by Peter Cushing who was Biggles Captain way back when. There’s also the side story of the TV Dinner company trying to launch a new product and a couple of their executives chasing after 80’s American guy to check up on him.

There are many issues with this film. First up, it tries to mimic anything successful and filmy from the era. The main character is dressed for large parts of the film in Indiana Jones’ leather jacket and fedora, it’s a blatant rip off along with the Back to the Future and Terminator style ‘Time Travel with Thunderbolts and Lightning’ stuff. There’s a part of me that was expecting him to heal someone with his glowing index finger before waddling into a spaceship.  It’s like they doubted themselves so much they had to jump on every single bandwagon they could find, all at the same time.

But, like I pointed out earlier, the biggest problem is that Biggles is a bit part in his own film. It’s like making a new Harry Potter film and having Rons’ mum in the lead role. The stories were written, there were nearly one hundred books of material for the writers and producers to draw from. They had the rights to all of them having bought up large from the family of Captain Johns in the late 70s. They could’ve done the easy thing and just grafted a few of the stories together and they would’ve been away. But for some reason they felt the best course of action was to dispense with pretty much all of the stuff that make Biggles ‘Biggles’ and instead fall back on re-cycled ideas with known box office appeal.

This is my beef with this film. They’ve taken something quintessentially British and Americanised it. They’ve removed all of the charm, all of the lovingly crafted storylines and replaced it with a TV Dinner Salesman jumping through time! What a waste. The worst bit is that it was mainly Brits that made this happen. This film was made pretty much exclusively in the UK. The scenes of New York streets are clearly some back street in Londons’ Docklands. A double yellow lined, cobbled street is made to feel Americany with the addition of a limousine, a Pontiac Firebird and some black dudes in high-vis and hard hats. Likewise, a cheap and nasty British office is made to look Americany with the addition of: 1) A cut out of Arnold Schwarzenegger 2) A fat dude with no scruples eating fried chicken and 3) A poster of Patrick Duffy. Really?

Peter Cushing is the best bit in the whole film. This was his last role before exiting stage left and he carries the ridiculous premise with aplomb. He makes his characters’ plight of living out his remaining years in a fusty room full of memorabilia inside Tower Bridge seem plausible. He doesn’t ham it up and remains the utter professional, rinsing every last drop of nuance and pathos from the threadbare and absurd script. He’d recently played Sherlock Holmes alongside John Mills and starred in Zucker, Abraham and Zuckers’ ‘Top Secret’ with Omar Sherif. What a shame this would be his last film. 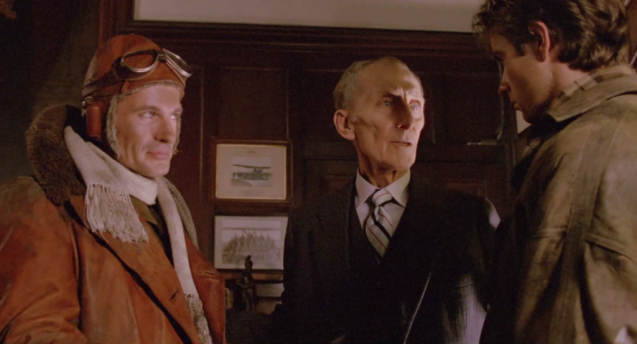 To pull this all together, I know this is a terrible film, and I dislike it greatly. But I’ve had quite a good time reliving the bad bits to write this review. It’s fun in places and there was one bit where I laughed out loud. It’s ridiculous, poorly written and a punch in the nose to the author Captain Johns. It’s a sign of the Americanophilia that existed in the UK in the mid 80’s. I was there, I remember that love of everything American. I watched American Football on Channel 4, dreamed that I would one day walk on astroturf and find out who shot JR. We all fell for the American Dream and I don’t think I can judge the makers of Biggles too harshly for doing the same. It’s a one star movie but I think I get why they did it and even though I disliked it I kind of enjoyed it all at the same time.