Well, here’s a film I’ve been putting off reviewing for some time. Why? Because after watching it three times over the last couple of years I still don’t know what I think of it. Is it a work of Spielberg genius? A mainstream Great War Epic? An overlong load of fluffy nothing? A stereotype ridden, poorly scripted, white elephant? A tear-jerking kids movie? It’s kind of all these things….and more…..and then a bit less.

The story was originally a kids book which, like Black Beauty before it, was written in an autobiographical format in the first person (or first horse). It was, of course, then adapted into a popular and successful stage play before finally getting the film treatment. And not any old film treatment, oh no. It got Senor Spielbergo and all that he has to offer.

Vice Admiral Lord Sir Steven Spielberg MBE CSO DC with 2 bars really does give it the beans. He chucks everything at his disposal into this. His signature orchestral accompaniment is evident from the very start and used extensively throughout. Every scene is lit, coloured and shot with an almost cartoony, vividness. The horse has a big heart, is emotionally intelligent and is anthropomorphised to within an inch of its’ horsey/person life. The humans all have strong character types which makes each and every one of them larger than life and two dimensional. I could go on. 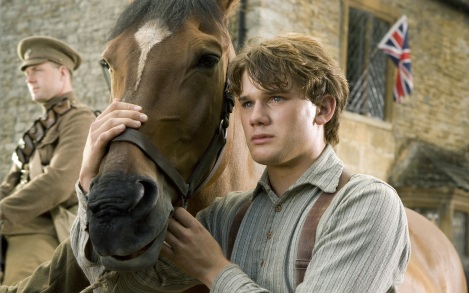 The story is basically, drunken dad buys horse he can’t afford, war starts, sells horse to army, horse changes hands from Brits to Germans to Frenchies to Germans again and then runs into some barbed wire. He’s saved from wire and ends up being found by the son of the drunk dude and returned to England, drunk dad and slightly rotund mum. The end. That’ll be two and a half hours please. And in truth, it felt longer.

There is plenty of filler here. I’m sure it’s stuff from the original book or the stage play (neither of which I’ve read/seen) but this is a transfer and the screenplay should’ve been better put together. There are plenty of book to film transfers that barely resemble the original story but still somehow retain its’ integrity. Maybe it was left in to plump it out to a slightly more ‘Epic’ish length. Whatever reason, it’s ended up being to the detriment of the film.

The big question I have is who is this film aimed at? If it’s kids (as the original book was) then the two and a half hours length will’ve caused a few problems. I can imagine quite a few mums and dads angrily whispering to their kids to keep still on their thinly cushioned cinema seats. Or trying to wake them in the warm, enveloping stillness of a Saturday morning showing. Is it aimed at Great War enthusiasts? No. The grey set? Maybe, but Judi Dench isn’t in it. Teenagers? No, no, no. I don’t get it. Middle class England? I think I might be onto something. Daily Mail types with floating American Walnut shelving and two kids called Tarquin and Saskia who want to see the film because their friend Cillian’s in it. Fuck off.

What this means is that it’s got a written by committee feel. The lighting and camera work are so sugary and vivid that a damp Devonshire hillside looks like Bilbo Bloody Baggins is going to pop out of a gaudily lit tussock at any second. The characters are bad stereotypes, wooden, one dimensional plot devices devoid of any reality. The whole thing is cartoony and on occasions lazy. There’s a bit right at the end where Spielberg uses the most clichéd horse movie scene of the lot. You know, the one where a horse is ridden at galloping speed along the brow of a hill at dusk in silhouette as the fevered orchestra reaches a sweaty, shrill orgasm. Really, he did that. He was eleven years into the 21st century and he’s doing that. I literally (honestly) face-palmed at that bit. 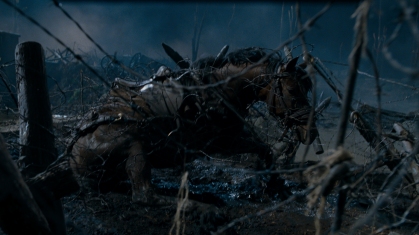 Well, so far, so bad…….But then some soldiers go over the top. Let’s not forget than Spielberg has some form with battle scenes. The opening 15 minutes of ‘Saving Private Ryan’ is one of the greatest film openings I’ve ever seen (shame about the ending). The good work done there is evident again here. It’s large scale, with plenty of extras, it’s fast moving and brutal without being too graphic. It’s all over too fast but I suppose that was the point. Tarq and Sask don’t want to be scared off after all.

If the battle scene is too brief then pretty much all of the rest of it is far too long. There are long arcs of scenes that ultimately add nothing to the overall picture. The entire section with the French girl and her grandfather is a pointless aside. The Germans start with the horse. The Frenchies get him, hide him and then lose him back to the Germans twenty minutes later. What a waste of my time. I nearly flicked forward when I got to this bit in the knowledge I wasn’t missing anything important. I think a swift hatchet job would be an improvement. If there’s a Directors cut of this film floating about anywhere I hope it’s forty five minutes shorter.

I could go on but, frankly, I can’t be arsed. As I said on twitter the other day this film is one quarter thoroughbred stallion (Spielberg’s pedigree, battle scene and horse acting) and three quarters glue factory nag (length, shit characters, lighting/cinematography, writing). If you’ve not seen it you probably will at some point because it’s classic holiday season fodder and I’m sure it’ll be trotted out (pun intended, thank you) over the next few years at any commemorative opportunity.

I’ll stop there. Next time I think I’m going to pick one of my favourites. I don’t like writing bad reviews. The negativity plays havoc with my chi.  Clicky Clicky

if you feel you must own this.