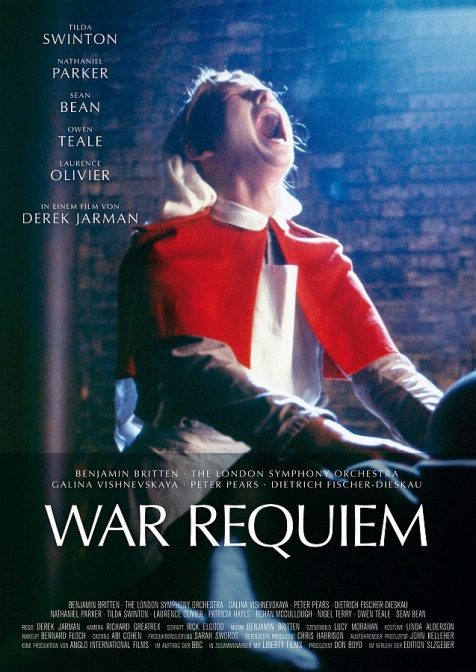 I didn’t know what a ‘Requiem’ was until a few days ago. Turns out it’s a piece of music written for the dead. I know this because I’ve just watched Derek Jarman’s ‘War Requiem’ (1989). The music, the ‘Requiem’ was originally written in the early 1960’s by Benjamin Britten for a big cathedral opening. In terms of what the music was all about I think I kind of got it. It’s basically a game of two halves, you’ve got some Latin stuff, sung in funny voices, over the top of a bloody massive orchestra doing some churchy choral stuff and then, for no discernible reason, there’s just the one of those people with the silly voices doing a kind of silly voice solo whilst half reciting, half singing the poetry of Wilfred Owen. Sound like the kind of thing to make a film out of? Not really, no.

Allow me to take a step backwards and give you a bit of a history lesson on this one. Benny Britten (as I’ve just decided to call him), Dear Dear Benny Benny Ben Ben Benjy Ben Ben Britten received a phone-call, or a telex or a courier pigeoned note in 1961 offering him a large carrier bag chock full of money to knock up something large scale and godly for the consecration of Coventry Cathedral. He was given complete freedom on the content and, after a glass of stout and a Café Crème, settled on the format as described above. Latin, Latin, Latin, Owen, Owen, Latin, Latin, Owen etc. The entire thing comes in at pretty much bang on 90 minutes. 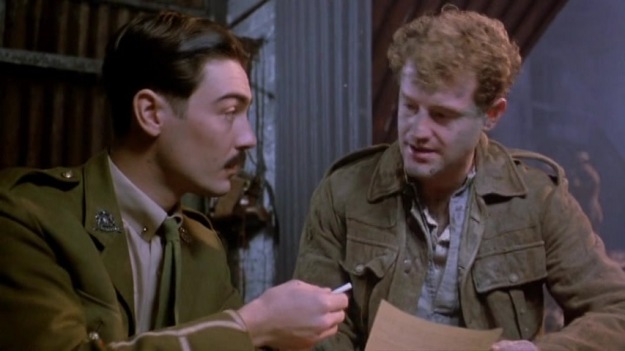 The format is to be applauded on the face of it I suppose. Interspersing a Roman Catholic mass for the dead with Great War poetry was possibly one of the greatest (and last) acts of national mourning for the deceased of the conflict. What I don’t get is what it’s got to do with Coventry Cathedral though. A cathedral that was destroyed in the Second World War. Still I, and I guess many others, appreciate the sentiment Benny, thank you. So Brittens’ War Requiem was played at the consecration of the cathedral and then received a staggered ‘release’ by orchestras around the world as they all took their turns to pump it out for their respective audiences.

And that was kind of it. A semi-interesting little curio of classical music that very occasionally received at outing by the State Orchestra of Botswana or some similar backwater. And then in 1988 Derek Jarman got his hands on the film rights with an eye on making a visual spectacle to go along with the music. I can’t imagine he was fighting off a gaggle of other directors with fists full of Hollywood dollars for it if I’m honest. But having secured the requisite paperwork he then had the headache of what the fuck he was going to do! Just chuck out some old guff with people in period costumes looking sad and screaming at the sky. That’ll do it.

While he was ably chewing his 4B pencil and staring into the middle distance as the creative juices flowed, he sent out his casting people to pull in some favours. As it happens whoever was in charge of the casting did a good job. Front and centre in the initial few minutes of the film is a young Tilda Swinton dressed up as a nurse pushing an old gent in a wheelchair. I squint a little and realise this old gent is Laurence Olivier. It turns out this was his last role before he took a final bow and exited, stage left.

As to whether he or young Tilda were any good in their roles, it’s hard to tell. There’s no narrative storyline really other than the vague impression of the passing of time and slowly worsening conditions, are the scenes I’ve endured the memories of Oliviers’ character as he slowly expires? Probably. It’s all a bit avant garde and as such I’m not really the correct audience for this kind of thing. I’m sure there are some people who’ve stared agog at it and wept uncontrollably as the metaphor and conjunctive peritonitis flowed over them. They’d have returned to their families and regaled then with the details of the underlying sense of disquiet and religious countenance of the piece. Their families would have nodded sagely and secretly pondered how best to shut them up, only one thing for it…a punch in the throat. Me, on the other hand, I just thought it was all a bit airy fairy and up its’ own arse.

The Wilfred Owen stuff should’ve been THE highlight of the film for me but, because of the stupid voices they used when singing, the poetry was unintelligible. I couldn’t actually tell that what was being sung was in English and I assumed it was just more silly voice Latin. I think it would’ve been best for me to pull out my penguin book of war poetry and settle back with the sound down and a nice cup of tea. The one bit that was good for me was right at the start when Olivier recited Owens’ ‘Strange Meeting’. I got that bit!

I’m sure all this speaks more about me than it does the film. I’m the knuckle dragging, mono-browed, great unwashed here and my lack of sensitivity or education or culture abounds. But there you have it, if I was to write anything else I would be lying to myself. I struggled through it, I watched it all and I shan’t do it again. If you want to give it a go, good on you. Maybe you’ll pick up on the underlying thalwegs, paradibbles and polydactyl dirigibles. For my part I’ll be in bed with a Stella Artois, watching Die Hard and punching my Mrs in the mouth.