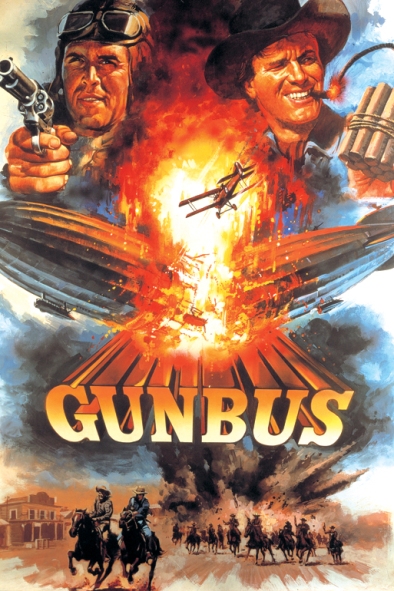 I think I’ve mellowed over the years doing these reviews. I was probably a bit tough on some of the early films I wrote about if they didn’t take themselves too seriously. I was a bit disparaging about ‘Shout at the Devil’, mostly for the scenery chewing antics of Lee Marvin. I was also tough on ‘Zeppelin’ because of its ludicrous premise. Both of these films are, with hindsight, enjoyable watches and if I had to distill my reviews down to just the one word to describe them both that word would be ‘Romp’.

My review material for today is a film I was not in the least bit aware of until a few weeks ago when a twitter buddy elbowed me in my virtual, social media ribs and pointed our this glaring omission from my film list. Thank you @garyashley5. ‘Gunbus/Sky Bandits’ (1985) is, you guessed it, a ‘Romp’. Basically, It’s a Great War Western from the mid-eighties directed by the guy who invented some of the optical camera tricks used to make Superman Fly starring a couple of unknown male leads. 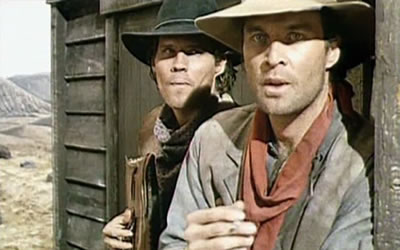 The film opens by splashing the star leads names across the screen. ‘Starring Scott McGinnis (and the wonderfully un-Hollywood sounding) Jeff Osterhage’. More exciting for me was when I noticed Rodney from ‘Only Fools and Horses’ was in it! Scott and Jeff play two bank robbing cowboys with pockets full of dynamite and matches. Too much dynamite as it happens, as they keep annihilating their chosen banks, razing them to the ground. If that was me I think I would’ve learned pretty quickly to chuck less dynamite. Eventually they run out of luck (and banks) and get caught by a bank manager who knows the local Army recruiter. There’s your set up, and off they go to war.

By this point I’ve lowered my expectations to the point where I’m bracing for the rest of the film to wash over me like a slow tsunami of cold sick. But, with one eye shut and gritted teeth, I slowly come around to its unfathomable charms. The boys are dropped pretty much straight into a battle scene. And…it’s okay actually, good scale, realistic looking puffy explosions and well-constructed trenches. At the end of this battle scene we get a glimpse of a massive, six engine German bomber appearing through the clouds like some giant, steam punk Gotha cum battleship in the sky.

From then on it gets a bit hit and miss with flying scenes utilizing the director’s now dated optical trickery, shot down planes which were previously trucking along at full flying speed somehow bellyflop, dead drop from the top of the screen and there’s the most ridiculous German accents and made up language you’ve ever heard. ‘Ze Bom ba, Capitan! Sticka fast! The boys steal a truck and, having never driven one before somehow fire it up and screech away at speed. They do the same when they steal a plane and loop the loop the thing within their first few minutes in the air. This is where dear old Rodders from ‘Only Fools and Horses’ turns up as a flight engineer at the aerodrome/abandoned circus where the boys have ended up.

It really is all over the place but there’s something about it which makes me struggle to dislike it. The good bits are the steampunk, Heath-Robinson-ey giant lumbering airship and bombers which are the Huns secret weapons. Our boys have some tricks up their sleeves to get one over on the enemy which I shan’t spoil for you. But suffice to say it’s slightly ridiculous, just like the rest of the film. I will mention that there’s a bit where one of the chaps flies his bi-plane around the inside of the giant steampunk dirigibles’ hanger. To get out he aims his kite at the slowly rotating vent in the roof and out he pops. Preposterous….but fun.

The boys eventually end up back in the Wild West after the end of the war and no mention is made about the poor girls who I guess are still mooning about at the abandoned circus awaiting the return of their beaus. The get straight back to work blowing banks to pieces before getting chased out of town. But this time they have a trick up their sweaty and worn sleeves. A plane is hidden out in the bush. They jump in it and disappear into the clouds. The end.

So what do I think of this one? I’ve just read this review back and realise how many times I said ‘Ridiculous’. Right-click – Synonym – fixed. It’s a true Romp. The writers, director, actors and everyone else involved haven’t let normal narrative rules, common sense or the laws of physics get in the way of the story. Yes, it’s ridiculous  outrageous but it’s also a ripping yarn and the unapologetic plot-holes and oddities do nothing to deflect that. I recommend it for reasons I cannot fully explain. Check it out for yourself if you can find a copy. 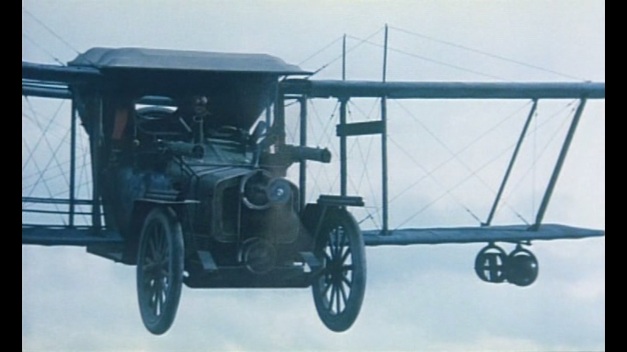